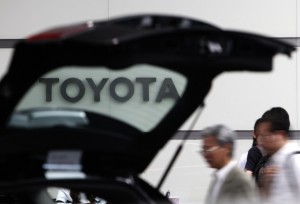 Toyota Motor Corp. said Wednesday it is recalling about 550,000 vehicles worldwide â€” mostly in the United States â€” for problems that could make it harder to steer.

Toyota has received a total of 79 reports about the defect dating back to 2007, said Corbett. There have been no reports of accidents or injuries related to the problems, he said.

Toyotaâ€™s reputation has taken a hit over the last two years due to a string of huge recalls that have ballooned to 14 million vehicles over that time, including millions recalled last year for acceleration problems. It faces damage lawsuits and lingering doubts in the U.S. about whether it had been transparent enough about the recall woes.

Japanâ€™s largest automaker has been trying to communicate better with customers and empower regional operations outside Japan to make safety decisions.

The news comes a day after Toyota said its July-September profit slid 18.5 percent to 80.4 billion yen ($1 billion) on plunging sales caused by parts shortages from the tsunami disaster in northeastern Japan.