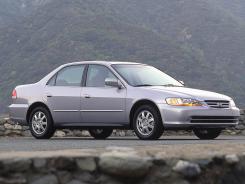 Honda Motor is recalling 304,000 vehicles globally for air-bags that may inflate with too much pressure in a crash, send metal and plastic pieces flying and cause injuries or deaths.

Honda said there have been 20 accidents so far related to the problems, including two deaths in the United States in 2009.

The Japanese automaker announced the recall Friday, which affects the Accord, Civic, Odyssey, Pilot, CR-V and other models, manufactured in 2001 and 2002.

The latest recall is an expansion of recalls for the same problem in 2008, and again carried out in 2009, as well as last year. The recall now covers about 2 million vehicles worldwide, according to Tokyo-based Honda.

Honda spokesman Hajime Kaneko said the cause for the latest recall was the use of incorrect material in the chemical used to deploy air bags.