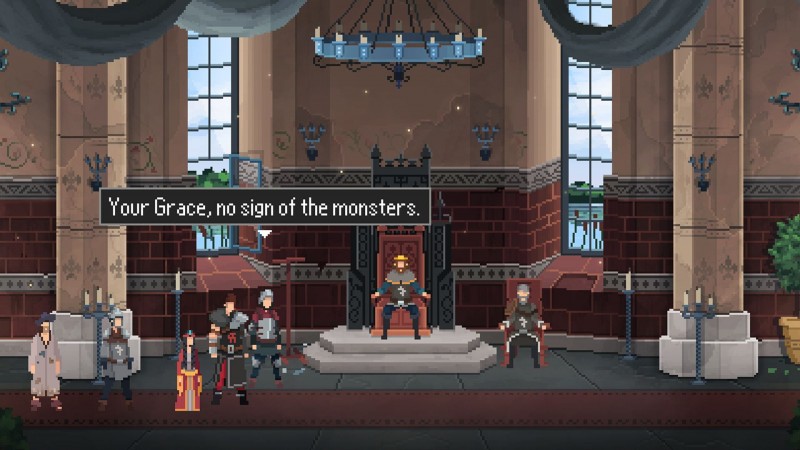 Uncertainty and second-guessing often go hand-in-hand with the most memorable moments in choice-driven games. When you know you can have a powerful impact on an experience, the stakes feel real. Yes, Your Grace is one of the most stressful games I’ve played, because it’s not just one decision or big moment that defines everything; it’s the culmination of seemingly small decisions and never knowing which ones could change the tide of your entire playthrough. That type of unpredictability is exciting and refreshing, but it is also unforgiving, and often feels like making lucky guesses rather than executing a shrewd strategy.

Yes, Your Grace is straightforward on the surface, and only takes a few hours to complete a single run. Every week, people come to your kingdom with requests for money, resources, or assistance from your higher-ups. The game is all about resource management; you only have so much to go around, so you can’t say yes to everyone. Once you run out of cash or supplies, it’s game over. However, you can’t curry favor and reap its rewards without giving a little. You may use precious resources to forge an alliance to gain access to another kingdom’s army or spend money upfront to fund an inn that provides a weekly cut of its earnings later. Whatever you do, your decisions grow more dire as turmoil escalates and you prepare for a seemingly against-all-odds war. This is an engaging loop for the most part, but it gets repetitive because the routine never gets much of a needed shakeup.

I liked weighing the cost of various people’s needs to determine how judicious I could be from week to week. Sometimes, I played it conservative and didn’t extend my services for anything but emergencies. Other times, when I felt comfortable with my savings, I took chances and helped people dabbling in witchcraft, and others clearly not in the right frame of mind. Without spoiling any of the outcomes, I can say that I was surprised at what pays off – but those surprises can be more frustrating than rewarding because it didn’t feel like strategy mattered much in my decisions. I’d compare it to that feeling of not knowing an answer on a multiple-choice test and just blindly guessing the answer. Sometimes you expend your precious resources and only get a fraction back in return, or you have extra to spare and take a risk and end up being rewarded. In a text-heavy adventure, where the gameplay hook is being a king and making the tough choices, it feels like a missed opportunity to not have the decision-making be more rewarding.

My first playthrough, I played conservatively and still struggled to make ends meet, sometimes having to reload saves by a day because that’s how close it was between life and death for my kingdom. My second time around, I helped as many people as possible, but gave up my family’s happiness as a lost cause – and I was rolling in money. My biggest annoyance with Yes, Your Grace is I could never figure out what type of strategy it was aiming for. You’re instructed to be careful with what you approve, but some risky prospects and loose spending end up being fruitful; too many times being careless or frivolous worked in my favor. You’re also pushed toward certain options more than others, like constantly being nagged about the importance of a certain wedding and making an impression, which further confuses expectations. Lastly, too many random events (which you can’t plan for) can pile up and end your reign, leaving you with a sense that you were doomed from the beginning.

Despite these maddening occasions, Yes, Your Grace paints shades of gray and asks interesting questions. Before one battle, I paused when I needed to chooses between two untrustworthy allies: One saved countless lives on the battlefield but abuses his wife, and the other’s whole persona is a lie (but that fabrication makes people feel better). Yes, Your Grace is a somber tale, and there aren’t “good choices.” The game has multiple endings, with some being more satisfying than others. But just because you have some choices doesn’t mean you can avoid the hardships. What sticks with me the most about the experience is how I was forced into horrible circumstances because I had no other options. It feels as awful as you’d expect, like when I had to turn away a starving community because I couldn’t spare the funds or an agent to help them rebuild. Sometimes I aligned with people I wasn’t sure were noble, just because I needed help. Even though this aspect was disheartening, it also works for the role you’re in – a king will always have to make sacrifices and Yes, Your Grace does a fantastic job at showing this plight.

These less-than-ideal outcomes aren’t based purely on your decisions as a player. Some of them are merely a part of the overarching narrative, such as forcing your daughter into a prearranged marriage. Yes, Your Grace is a basic tale about running a kingdom and going to war, but it shines best in how it humanizes the tale by having the king have a close relationship with his three daughters. Seeing them bond and grow is endearing, and the story does an excellent job connecting you to the king and his world. In a game with a barebones story, it gave me something to fight for.

I enjoyed Yes, Your Grace’s tense decision making, but sometimes it tries too hard to ensure the player fails. Carefully evaluating my decisions felt like a waste when it didn’t change certain outcomes or put my kingdom in a more advantageous place. I admire that the choices aren’t black-and-white, and I have fond memories of the king and his daughters, especially of the youngest and her quest for the perfect pet. But Yes, Your Grace requires too much hindsight and replaying through content to see better outcomes, which is more repetitive than eye-opening. 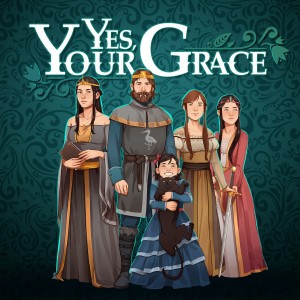 Summary: Yes, Your Grace excels in its tense decision making, but sometimes it tries too hard to ensure the player fails.

Concept: Put on the crown, step on to the throne, and decide the best use of your resources as a war approaches

Graphics: From your kingdom to the people you meet, everything uses a retro, pixelated aesthetic. It won’t wow you, but it has some charm

Sound: Appropriate sound effects amplify the chaos on the battlefield, and characters speak their own fictional language, which is a nice touch

Playability: Point-and-click controls are easy grasp and use, but the management decisions are what keep you up at night

Entertainment: Yes, Your Grace puts you on a roller coaster of emotions, allowing you to feel the weight of your decisions. However, sometimes things feel too arbitrary