Halo Infinite’s multiplayer has been out for a couple of weeks now, and besides some issues with battle pass progression, it’s been widely received as a great comeback for the series. Starting next week, it’s going to get even better for Xbox Game Pass Ultimate subscribers.

That’s because Microsoft has announced that Ultimate members will get monthly multiplayer bonuses. The first bundle will go live on December 8.

“It’s an awesome time for Perks because we’re excited to reveal that Ultimate members will be locked in to get monthly Halo Infinite multiplayer bonuses, starting with your first bundle on December 8,” an Xbox Wire blog post announcing this month’s upcoming Game Pass additions reads. “Don’t forget to claim this and more in the Perks gallery on your Xbox console, Xbox App on Windows PC, and Xbox Game Pass mobile app.” 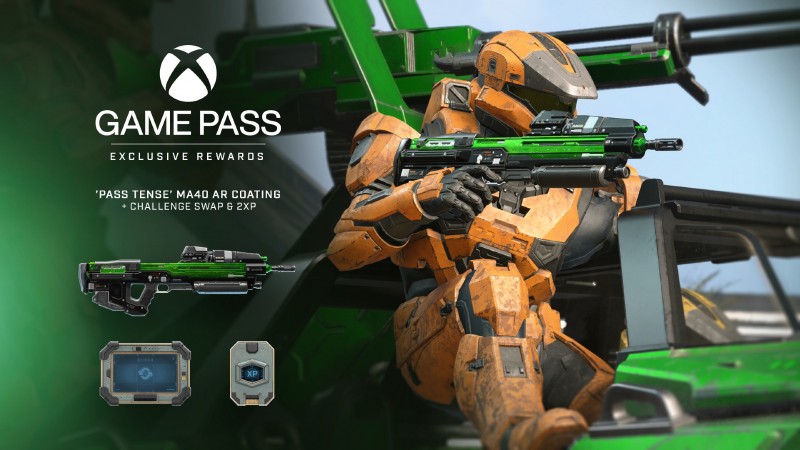 This month’s bonus is the “Pass Tense” MA40 AR Bundle, and it comes with an exclusive “Pass Tense” MA40 Assault Rifle coating, as the bundle’s name would suggest, along with four 2XP Boosts and four Challenge Swaps. You can check out the bundle above, which includes a look at the new AR coating.

While waiting for this bundle to go live next week, check out this post detailing everything available in the Halo Infinite multiplayer shop this week. Then read about how 343 Industries has updated multiplayer progression to give players increased XP in the first six matches of a given day. This new bundle goes live the same day Halo Infinite’s campaign launches, and to get prepared for that, check out this recently-released Halo Infinite campaign trailer.

Are you excited about these monthly Halo Infinite multiplayer bundles for Xbox Game Pass Ultimate subscribers? Let us know in the comments below!